Many people know Binsey, especially residents of Oxford and generations of Oxford students, who may have walked or cycled here, coming up Binsey Lane, or crossing Port Meadow. They may have been coming: for a drink at The Perch; to pray or worship at our 12th century church; to pick fruit at the ‘Pick Your Own’ in Binsey Lane; to walk along the river bank, under the poplars, as in 1879 did the poet Gerald Manley Hopkins; to sail or row on the river; to fish; to watch birds; to find the rare Creeping Marshwort; or just to experience what seems a miracle of rural calm just a few minutes from the city centre.

I was born in Binsey, in 1957. At the time there were at least two working farms, and not long before there had been three. Thanks to the working dairy, managed as they were in ’60s, there were rich aerial pickings for the house martins, whose nests lined every eve, and whose swooping filled the summer skies. Now there is just one farm, Medley Manor Farm, which runs the Pick Your Own, while the remainder of the land is farmed sustainably by FAI Farms, formerly the University Farm in nearby Wytham.

So Binsey’s residents now – there are about thirty – include the retired, and those still working in Oxford and the surrounding area.

Further in the past there were probably many more, whose graves will be there in the churchyard. The soil is not particularly rich agriculturally, being a light river alluvium, but according to a Wikipedia page, aerial photographs show traces of dwellings all the way from today’s main village to the church.

Inclosure came late to Binsey, in 1821, after which much previously arable land was converted to pasture – it is still easy to see ridges in fields, especially in the frequent floods.

Thanks also to my brother, also Binsey born, for this link to an article in 1988 on medieval Binsey from ‘Oxoniensa’, including this map 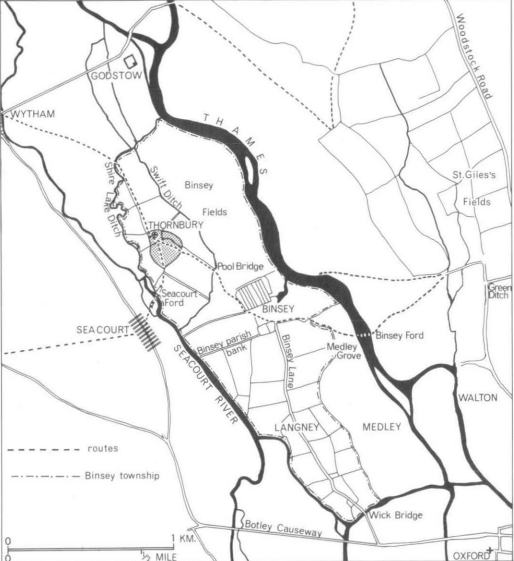 Wikipedia’s page about Binsey and its history.